Led by graduate engineering student Mohit Patil, graduate engineering student Parth Shah and Warrington student Chloe Stanton, BrainForce empowers the disabled by providing hands-free operation of phones and computers to those who cannot use their upper limbs through head-wearables (either glasses or earpieces) containing a gyroscope that tracks the user’s head movements, which then control a mouse on the user’s screen. 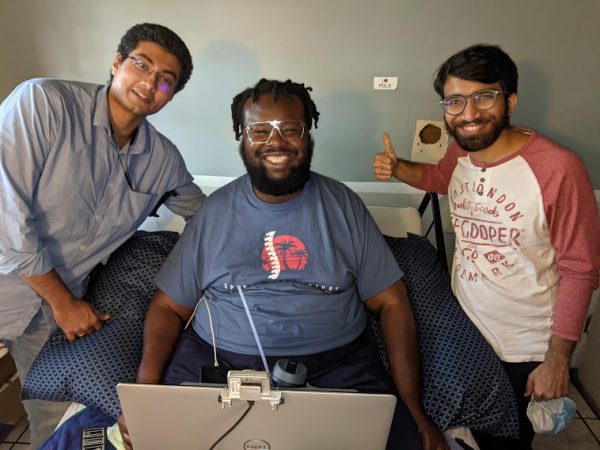 “Winning the Big Idea Competition was validation of the efforts we put in and confidence that the mission is worthwhile,” Patil said. “We have been going after this problem since December 2019 and iterated the idea several times. Big Idea also gives us a larger platform to reach people and several people have reached out with suggestions and help since we won.”

BrainForce is housed in the Gator Hatchery at UF Warrington, which has been an important asset in the company’s journey.

“The Hatchery team, along with Megan Buttel, Dr. Berthy, and Jamie Kraft, have helped and mentored us personally, which has been a key development of BrainForce as a team. It’s also connected us to our current team members. We are always looking for new passionate Gators to join our team.”

The $25,000 first-place prize will have an important role in the future of BrainForce.

“The prize money is helping us complete the developmental tasks over the next few months and also get a step closer to reaching the market,” Patil said. “The UF Big idea prize money is a substantial resource for a company in the stage we are in, where not losing momentum simply due to lack of resources is not an option.”

Presented by the UF Entrepreneurship and Innovation Center in the Warrington College of Business, the Big Idea Competition is a four-month event designed to help students grow their business ideas with a chance to win more than $40,000 in prizes. Due to COVID-19, this year’s final event was hosted virtually.

Check out all of the winners from the 2021 Big Idea Competition below.