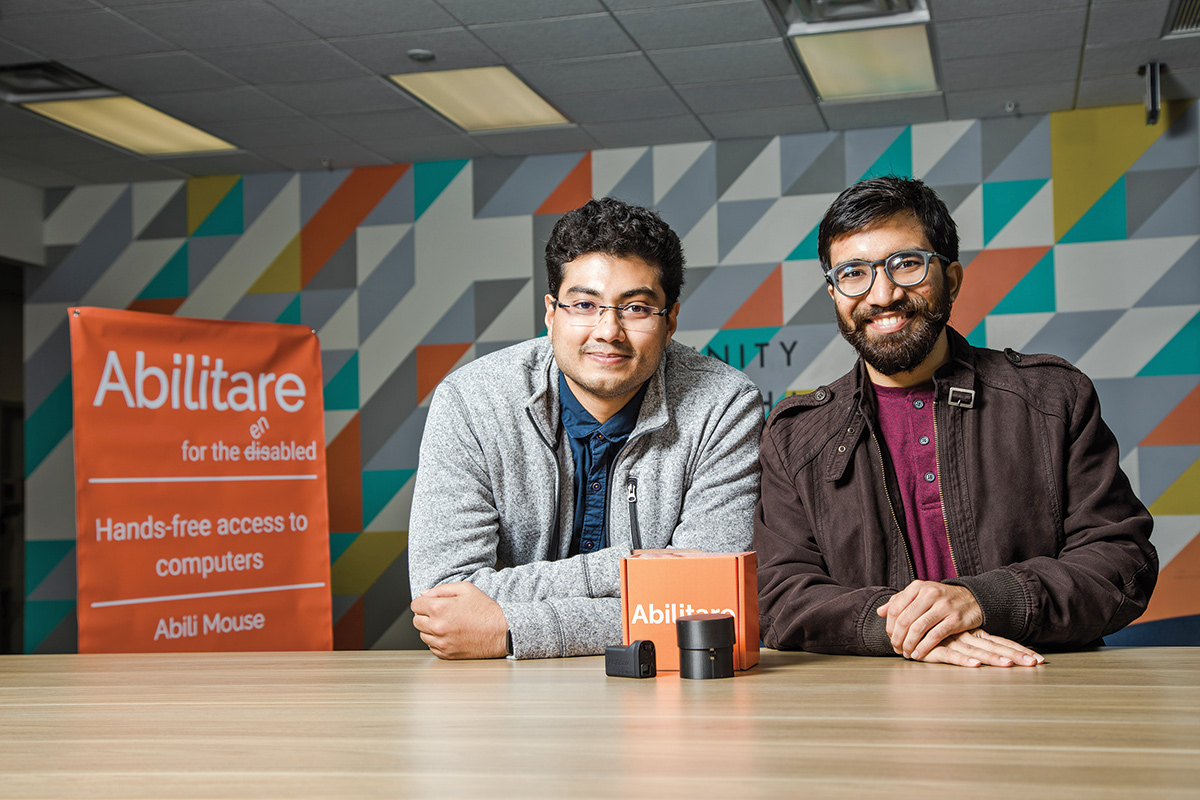 Mohit Patil, 28, studied mechanical engineering and physics in his native India, where he researched assistive technology and brain-computer interfaces. Patil pursued his master’s in electrical engineering and continued with his research at the University of Florida, graduating in April 2021 with a minor in entrepreneurship.

Parth Shah, 26, also from India, attended the same university as Patil for undergraduate work and majored in electrical engineering. He also was a senior software engineer in India, specializing in rapid prototype development, before pursuing his master’s at UF in computer science. In his UF research in artificial intelligence, he worked on health care applications and graduated last April.

People with disabilities depend on assistive technology to do their jobs, get an education and enjoy a better quality of life. Yet, Patil says, “there has been a lack of innovation while the rest of the technology is making leaps. It is a huge waste of human potential and human resources when a large part of the community cannot contribute to society through jobs or education because of a lack of assistive technology.”

In early 2020 as a side project, Patil and Shah, then college roommates, were exploring technologies that would better enable individuals with disabilities. They wanted to create social impact as well as strong business potential. “We both believe that technological advances should first be used to offer recovery to those who have lost something. There's a satisfaction that you get when your work actually helps someone improve their life,” says Patil. Their passion project became a full-time pursuit post-graduation.

Abilitare, which means to enable in Italian, is a startup that is initially focusing on empowering people who cannot use their hands or fingers by providing hands-free control of smartphones and computers. “Our mission is to grant them the same level of productivity as everyone else at school, work or home,” Patil says.

Patil and Shah have started with one product — a small, lightweight mouse that discretely attaches to a cap or headphones or to a headband included with the product. An Abili Mouse is compatible with multiple computers, tablets or phones and allows users to make small head movements for all the functions of a computer mouse — up, down, left, right, left click, right click, double click — with the same results. The mouse is compatible with voice dictation applications, and integrated dictation is coming soon. They are working on a smaller, more advanced mouse for the $20-billion assistive technologies marketplace.

Patil and Shah spent most of 2020 talking to people who had difficulty using computers because of disabilities or injuries, soliciting feedback about what people had tried — what worked and what hadn’t — and about what other solutions they thought might help. “So we actually started with the applications of brain-computer interfaces, but then when we did more market research, we found out that even simpler technologies, applied properly, actually solve the problem,” Shah says. “That's why we started with the head mouse.” As part of the Gator Hatchery, a UF student incubator, they created a prototype and were pleased with the early feedback.

In April 2021, Patil and Shah won UF’s Big Ideas Competition, earning $25,000. The co-founders put in another $25,000 to fund Abilitare and began forming a team of engineers and student interns in Gainesville and India. By August, 43 people around the U.S. and Canada were testing the Abili Mouse. In October, venture capitalists chose their pitch for a top prize at the Florida Venture Forum’s Early Stage Capital Conference. The startup shipped its first head mouse in January.

The Abili Mouse sells for $800 to consumers, with financial assistance available, and about $1,200 for corporations, rehabilitation professionals, non-profits and governmental entities serving disability communities.

Abilitare would like to develop an entire line of assistive technology products, possibly including speech-generation devices, voice programming for dictation and hands-free wheelchair control tech, says Shah. The co-founders are seeking to raise $250,000 for manufacturing, inventory, team expansion and patent filings.

“The strength of our team is in how quickly we can churn out these designs. For example, we released this head mouse into the market in seven months, and that's what we're banking on going forward. We will have a line of products, each more ambitious than the one before it,” Shah says.